Lateral raise with dumbbells are the quickest and safest way to achieve a V-shaped torso. The Dumbbell lateral raise workout burns fat near the hips, belly, and torso to give an attractive V-shape body. Most fitness freaks face many difficulties with this exercise, such as the inability to execute the exercise correctly due to lacking knowledge.

This is a detailed guide for all the beginners and gym freaks who’re looking forward to building strong and attractive core and bold shoulders.

There are several pros associated with dumbbell lateral raise exercise, which are covered below:

1. The deltoid muscles (located above the ball and socket joint of the shoulders) are the core target areas in addition to the torso. These muscles get trained rigorously to achieve a fit and attractive body.
2. It increases oxygen intake in the body.
3. Lateral raises help improve blood circulation and increases stamina and energy.
4. It strengthens the shoulders that reduces the chances of shoulder dislocation. A person training with dumbbell lateral raise will find it easier to lift heavy objects without worrying about muscle strain.
5. This is no less than a complete workout that trains the most important parts of the body.
6. It helps achieve boulder-like shoulders in no time.
7. This workout doesn’t require visiting a gym mandatorily. 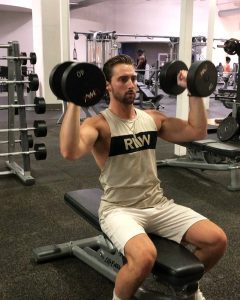 Now that you’ve learned so many interesting advantages of a dumbbell lateral raise, next you’d like to know how to execute this exercise perfectly. Before you proceed, ensure procuring a pair of dumbbells. Here’s the step-by-step guide according to verywellfit :

1. Acquire The Initial Position
Stand and hold dumbbells in both hands. Keep the hammer grip and avoid bending the spine. Legs should be straight. Avoid bending the knees. Open your legs shoulder-wide. Keep the core tight and pull the shoulders back. Keep the vision straight and avoid looking down or up.

2. Lift The Arms
While keeping this posture, raise both the arms to the sides until your shoulders form a T-shape. Hold this position for 3-6 seconds and avoid engaging upper back and neck muscles. If you feel stress on your deltoid muscles (located above the ball and socket joint of the shoulder), then you’re on the right track.

3. Disengage The Muscles
Gently bring down both arms simultaneously while keeping the vision straight to avoid engagement of your neck muscles in the workout. Come back to the initial position and stand still for a few seconds (2-3 seconds). The speed of lowering your arms should be half the speed of lifting the arms.

4. Repeat
Repeat another round by lifting the arms, holding the position, and lowering the arms gradually. One set should have 15-20 rounds, and each workout can have 2-3 sets of dumbbell lateral raises.

It’s important to ponder some important tips to master this straightforward workout to gain the most of it, according to coachmag :

· When lowering the arms, pause for a while to reduce the stress from the shoulders. Ignoring this will make the shoulders tired sooner than expected, causing the upper back and neck muscles to get involved in the workout process, which is unwanted.
· Always lower the arms gently and gradually to keep the stress on the shoulders. When taking the pause, the shoulders will get a chance to recover and be ready for the next repetition.
· Ensure raising the arms with more emphasis on the elbows. If raising the arms with the elbows, the stress will be relieved from the rotator cuffs, placing more tension on the deltoids, which is the main objective of this workout.
· Turn the wrists when lifting the arms. The wrists should be so that the little finger is upwards while the thumb stays down (much like a thumbs down gesture with a hammer grip). This is highly crucial to ensure more muscles near the deltoids get engaged in the workout process. The results include training of more muscles per repetition. Reverse the wrists’ movement when lowering the arms.
· Instead of keeping the speed of lifting and lowering the arm the same, consider taking more time to lower the arms. The results include training of the shoulders to handle weight so that your weight lifting capacity will increase. Additionally, you’ll notice an improvement in weight handling.
· After reaching the raise position, hold the position to again train the body to handle the weight and gain more control over the weight being held. The hold time shall increase with time for better results. 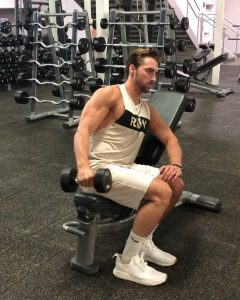 Instead of raising from the side, there are several variations to try out. Each variation helps train a certain set of muscles, while the key focus is on the shoulders, torso, and core. Coachmag and menshealth suggest a few top-notch dumbbell lateral raise variations discussed below:

1. Standing Lateral Raise
This is the same version whose procedure was covered above. The objective is to keep the arms by the sides and raise them to the shoulders. This variation allows slight bending of elbows if that makes the trainee comfortable. However, too much bending of elbows is strictly unadvisable.

2. Front Raise
This is a modified version of standing lateral raise. The entire procedure and tips will be applied here as well. The only difference is that the arms will be raised to the front instead of by the sides. Here’s how to perform:

a. The initial position will have one arm (say the left arm) by the side and the other arm in front.
b. Raise the left arm by the side (as if performing the lateral raise) while lifting the right arm to the front (as of performing the front raise) simultaneously.
c. Hold the position for a few seconds and lower both arms at once.
d. Perform a repetition of 10-15 times. Take a break of 75 seconds. This will be one-half of a set.
e. To complete the set, change the arms; this time, perform the lateral raise with the right arm and the front raise with the left arm. A repetition of 10-15 times will mark the completion of one set.
f. Remember to keep the repetition count of the first and second half the same.

4. Shrugs
As the name suggests, the idea is to hold the dumbbells by the sides and shrug the shoulder as you’d normally do. This workout demands at least 12 repetitions, making one set with at least sets to gain muscles. Here’s how to perform:

a. With dumbbells in both hands, let the palms face inwards.
b. Shrug the shoulders by lifting the shoulders as high as you can (but remember to be gentle). Do not tighten the muscles too much.
c. Hold the position for 2-5 seconds and lower the shoulders. Take a break of 2-3 seconds to mark an end to one repetition.

This procedure involves shrugging both shoulders simultaneously. In another variation, you can shrug one shoulder at a time and then shrugging the other shoulder similar times to complete one set. It’s important to keep the arms loose and let the shoulders lift the weight held in the hammer grip.

1. Lateral Raise With Resistance Band
The resistance band replaces dumbbells in this variation. A resistance band, however, might be uncomfortable for some trainees. That’s why it becomes slightly challenging to perform a lateral raise with them. To execute correctly, rest in the initial position with the handles of the band on both hands. Have a tight grip, or else the band will slingshot towards the feet. Follow the steps of dumbbell lateral raise.

a. Stay in the initial position as if performing a regular dumbbell lateral raise.
b. Bend forward from the hips to make the torso parallel to the floor. The body should be making a 90 degrees angle from the side view.
c. While bending, bring the arms to the front and let them hand straight below the chest.
d. Hold this position and lift the arms by the sides to execute lateral raise like a regular lateral raise.

The only difference between a bending lateral raise and a regular lateral raise is that this version is performed by staying bent the whole time. Once a set is completed, please revert to the initial standing position and take a rest of at least 75 seconds before proceeding to the next set.

1. Overhead Press
Keep the feet intact and hold a large dumbbell held with both hands. The initial position will demand holding the dumbbell so that the grip rests near the chest. Begin by lifting the dumbbells straight with arms slightly lateral to the body. When lifting, the arms should get straight. Maintain this position for 2-3 seconds before lowering the weight back near the chest.

2. See-saw Overhead Press
This is similar to the overhead press. But here, you need to hold two dumbbells in both hands. The initial position demands resting the hammer grip on the shoulders (near the ears). Lift one arm straight while the other is still resting. Lower the lifted arm while lifting the other arm simultaneously. Remember to keep the arm straight for a while, 3-6 seconds before lowering.

3. Front Plate Raise
Hold one large dumbbell plate with both hands and let it rest in the front. Lift the plate with both hands to execute a similarity of front raise (but this time with a dumbbell plate). Raise the arms higher than the head length, pretty much making a 135 degrees angle concerning the floor.
Another variant allows lifting the plate to the chest height, making a 90 degrees angle concerning the floor.

4. Half-Kneeling Pulls (Cable Rope Pull Near The Face)
Kneel in front of the cable machine. Hold the handle with both hands and remember to adjust the weight before initiating. Pull the cable near the ears while keeping the upper arms flat. Draw the hands apart from the face and do not lower the arms no matter what. Remember to hold the cable near the face for a while before releasing it to the initial position. 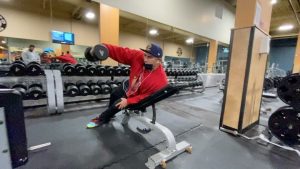 Below are some general mistakes made by most ‘trainees that you can easily avoid.

Avoid opting for too much or too little weight. Don’t hesitate or feel ashamed of initiating with less weight. A 5Kg dumbbell per arm is sufficient at the initial stage.

Avoid Momentum To Achieve A Swing

When the body gets tired, the brain subconsciously triggers the body to start swinging the weight because swinging creates momentum. This momentum makes it easy to lift the weight, which is an incorrect approach to building big and strong muscles.

Most people bend their heads forward, which is not only an incorrect approach but also highly dangerous. Leaning the chin towards the chest will cause strain to the neck muscles and the back of the head. The consequences include headaches, neck aches, sprain, and much more. 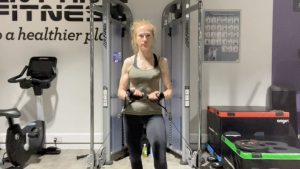 First-timers, skinny people, teenagers, and women should begin with 2Kg or 3Kg dumbbells in each hand.

Those who’re not confident with these options shall opt for 1Kg dumbbells, to begin with.

Men and people with a normal energy level may begin with 4Kg .

An individual who’s confident about lifting a heavier weight shall begin with 5Kg .

For advanced overhead press, 35Kg dumbbell held with both hands is preferred.

For overhead see-saw press, 10-10 Kg dumbbells in both hands are suggested.

Weight plates can be substituted by adjustable kettle weight .

If looking for a fancy dumbbell, here’s a 10Kg dumbbell option.